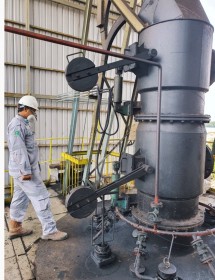 Nordiani, one of the rubber farmers in Bayas hamlet, Teweh Tengah sub-district, said that rising rubber prices make farmers in this area re-excited. Because, the price of rubber in this area has decreased in the last month.

"The price of rubber back up Rp200 is enough to make farmers happy, where in the last month the price had dropped, inland Barito River is a center of rubber gardens in Central Kalimantan Province," he said on Saturday (02/09/2017).

The improvement in rubber prices was prevalent in rubber plantation centers in the district. Production of smallholder rubber garden dominantly accommodated among traders who came to the farmers' garden or better known as middlemen. "This could also be due to the act of middlemen who indeed control the farmers," he said.

According to him, the middlemen admitted the price of buyers adjusted to the position of selling price among traders or factories in Banjarmasin, South Kalimantan government center.

"The problem is the farmers of this area is still dependent on the middlemen because until now there is no rubber factory, whereas the production of rubber farmers quite a lot," said Nordiani.

The area of ​​smallholder rubber plantation in the regency, also known as the rich natural resources potential of coal, was recorded 35,646 hectares with dry rubber production reaching 18,696 tons per year.

The people's rubber garden is spread over nine sub-districts in North Barito regency.