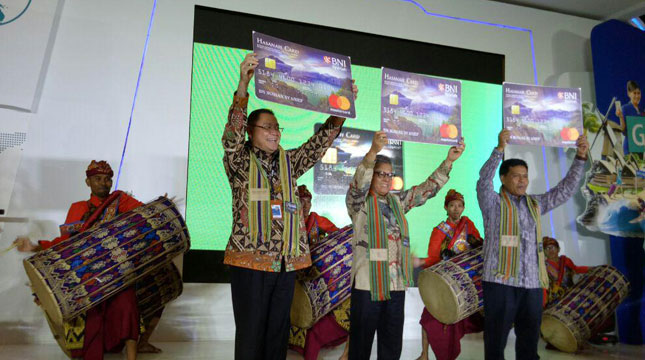 By launching official card this is one way Bank BNI Syariah to promote halal tourism in West Nusa Tenggara.

According to Abdullah Firman Wibowo, President Director of BNI Syariah said, "This is a form of support in the halal tourism program or Halal destinations in Indonesia and with the present edition card design of Lake Segara Anak Rinjani in Lombok," he said during a press conference BNI iB Hasanah Card, Official Travel Card for World's Best Halal Tourism Destination, at JCC, Friday Night (9/22/2017).

Meanwhile, Lalo Moh Faozal, Head of Tourism Culture of West Nusa Tenggara, said, "This is a form of support given to us as a halal world destination, I hope all Indonesian people can support halal tourism in Indonesia," he continued.

Continue Word, "For now, the card is a picture of Lake Segara Anak Rinjani this, only printed a thousand cards, so if it runs out, print again and so on," he added.

Special offer given to BNI iB Hasanah Card special edition Lombok designers will get benefits in the form of cashback 10 percent up to Rp. 500 thousand for Halal BNI Syariah tour packages with ESQ Tours Travel.

"This cooperation is a form of synergy between banks and the NTB Government, therefore, with this cooperation we expect the people of Indonesia to participate and continue to support halal tourism," said Firman.