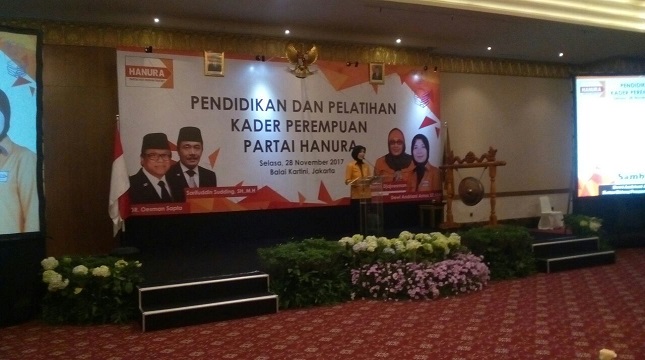 INDUSTRY.co.id - Jakarta - Hanura Party holds education and training (Training) of female cadres held a day at Balai Kartini, Tuesday (28/11/2017). The training titled "Encouraging" Women's Representation as a Determinant of Public Policy toward a Developed Indonesia ", was held to strengthen the role of Hanura women.

Chairman of Women's Division of Hanura Party, Dewi Andriani Arman said this activity was followed by 175 cadres. They come from different regions. From this activity he said, all participants will also have the opportunity to register themselves as legislative candidates (caleg) in the upcoming 2019 election.

"We need a more comprehensive strategy to encourage the strengthening of women's roles and positions in politics. In order to improve the quality of female cadres as legislative candidates, the field of rising of women of DPP Hanura Party implementing an interactive and participative one-day Education and Training program," Dewi said when delivering his speech.

In addition, he said, this activity to improve quality in the face of legislative election competition.

"We hope that in this training and education, women who join later can have supplies, especially in running for legislative elections," explained Dewi.

The same thing also expressed Chairman of the DPP Party Cadence Party Hanura Hardjadinata. He insists his party is not only serious to pursue a target of 30 percent quota of women in the upcoming Legislative Election. But more than that, his party also wants to give birth to the cadres of qualified women.

"We want to present a woman-designer who is ready to go to society. And I'm sure Hanura female cadres can meet our expectations," said Hardjadinata.