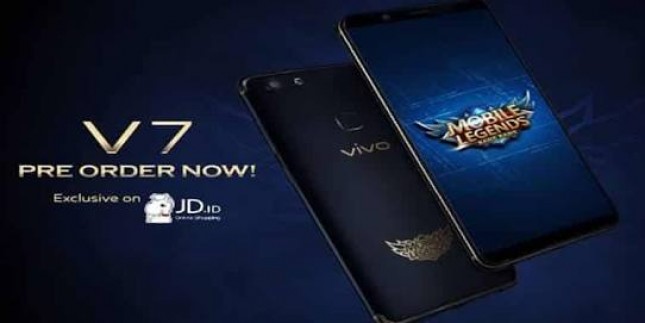 In terms of appearance, this special edition is slightly different because the rear body of the Black Matte colored device with nano sand coating equipped with Mobile Legends located at the bottom.

Vivo gave a gold accent on the frame and the side of the smartphone 5.7-inch sail.

This Chinese smartphone manufacturer also promises Customized Optimization options in Game Mode feature will reduce the lag when playing Mobile Legends: Bang Bang because it is able to maintain the stability of internet connection.

When activating the feature, the player will not be disturbed notifications or phone calls and can reply to chat without having to stop the game.

In addition, Funtouch OS 3.2 based on Android 7.1.2 Nougat supports more multitasking activities, including while playing.

Internal memory of 32GB which can be upgraded to 256GB with the presence of microSD slot also makes the user has more space for various applications. Vivo V7 Mobile Legends edition: Bang Bang is offered at Rp3.799.000, just like its regular edition.