Regent Azwar Anas Give Thanks to Rismaharini 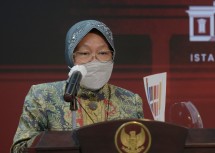 INDUSTRY.co.id - Surabaya - Banyuwangi Regent Abdullah Azwar Anas is grateful to the Mayor of Surabaya Tri Rismaharini who strengthens himself against the political dynamics of recent times.

"Thank you Mrs. Risma for the moral support that she gave to us," "he said in a press release received by media crew in Jakarta, Sunday (7/1/2017)

The East Java Regional Head election became dynamic, as the mandate of Anas assigned as the candidate for Vice Governor to PDI Perjuangan as the political party of the bearer.

Azwar Anas claims to be a fellow comrade, Risma has contacted and communicated by phone.

"Mrs. Risma provides moral support to us in responding to the current political dynamics," said the regent full of achievements.

Not only that, Risma also encouraged her to keep excited to build a better area again.

"Mrs Risma's support strengthens us to continue the work of Banyuwangi development even better as Mrs. Risma did with extraordinary for Surabaya City," he said.

Meanwhile, Risma previously gave a statement to encourage Anas in the face of a political constellation that moves very quickly.