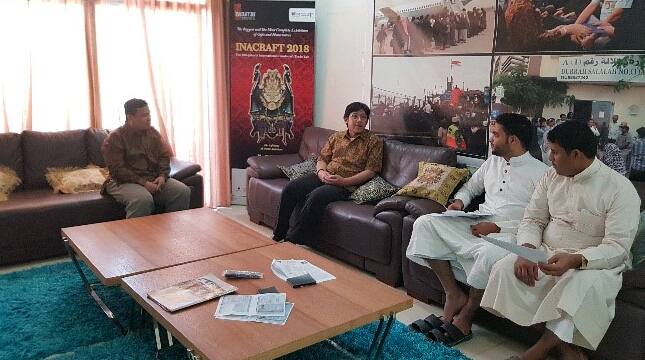 INDUSTRY.co.id - Jakarta - Embassy of the Republic of Indonesia (KBRI) in Sana'a received a visit from two Yemeni businessmen who wanted to explore the potential of Indonesian ceramic imports.

In the press release received on Thursday (18/1/2018), the two entrepreneurs were accepted by the Ad-Interim Chargé d'Affaires (KUAI) of the Indonesian Embassy in Sana'a Sulthon Sjahril accompanied by the Ekopensosbud Staff of KBRI Sana'a Muhaimin Ahmad Yasin.

The Al-Tamimi Company for Ceramic and Building Materials was founded in 2007 in the city of Tarim, Hadramaut Province, Yemen.

Previously the company has imported wall ceramics per month around eight to 10 containers from India, 12 to 14 container floor tiles from Oman, and 18th to 20th floor containers from Saudi Arabia.

While for ceramic products made in Indonesia has increased sales because of the demand by consumers and got a good place in the local market in Hadramaut Province, especially from 2010 to 2014.

Indonesian ceramic products are in demand in Hadramaut market because they have good quality, thicker and stronger and competitive price in the market. Ceramic products made in Indonesia sold in local markets Hadhramaut is Roman, KIA, and Molinek.

However, since 2015 when the armed conflict took place in Yemen, the supply of ceramics made in Indonesia began to decrease, according to the Indonesian-made ceramic distributors in the province of Hadramaut.

For that reason, the two Yemeni businessmen who came to the Embassy of Sana'a were planning to explore the purchase of ceramics to several companies in Indonesia by visiting directly and exploring the ceramic market directly in Indonesia.

The Yemeni businessman is targeting the first visit to import Indonesian-made ceramics at least two containers.

Meanwhile, KUAI KBRI Sana'a has submitted a list of ceramic exporters in Indonesia to the two entrepreneurs and informed the schedule of the INACRAFT exhibition in April 2018 and the Indonesian trade show in October 2018.

In addition, KUAI KBRI Sana'a also conveyed a general picture about the opportunities, convenience, and procedures to invest in Indonesia.