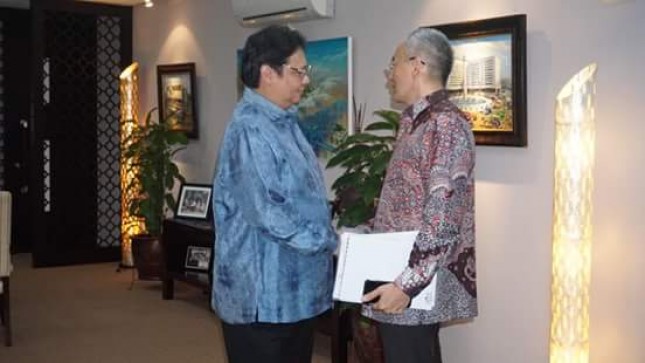 Minister of Industry Airlangga Hartarto received the visit of General Manager of Genting Oil Pte Ltd, Wandy Wanto at the Office of the Ministry of Industry, Jakarta, Wednesday (14/2/2018).

INDUSTRY.co.id - Jakarta, Deputy General Manager of Genting Oil, Wandy Wanto disclosed his meeting with Airlangga Hartarto Minister of Industry to discuss the company's intention to invest in the petrochemical industry sector in Indonesia.

"For investments in the petrochemical sector in Bintuni we hold investors from China," said Wandy in Jakarta (14/2/2018).

According to Wandy, the Chinese investor expressed his interest to invest US $ 1.5-2 billion to produce methanol.

"If realized, the petrochemical plant needs to go through some preparations until it can operate in 2022," said Wandy.

"For me whoever the most important investor there is petrochemical industry there," he explained.

Furthermore, Sigit said, the current import of petrochemical products reached Rp220 trillion, of which 70 percent are based on polypropylene and polyethylene.

So, if the Chinese petrochemical investment is really realized, then the resulting product can substitute the import of methanol of 1.8 million tons per year or equivalent to Rp100 trillion.

Sigit believes that Indonesia has the potential to become the center of the growth of the petrochemical industry, and can even be competitive in ASEAN and Asia. This is because Indonesia has potential oil and gas reserves of up to 7.5 billion barrels and 150 trillion cubic feet and 30 billion tons of coal reserves.

Ministry of Industry noted, during the year 2015-2017, the growth of petrochemical industry based on oil and gas is still influenced by the increase of gas price. The reason, gas raw materials to form 70 percent of the production cost structure in the sector.

Therefore, in an effort to accelerate the realization of investment in the petrochemical industry, the Ministry of Industry has proposed that this sector needs to get a decrease in gas prices.

"Ascertained, with competitive gas prices, the competitiveness of the national petrochemical industry is increasing," Sigit said.