Food Security Board Requested Immediately To Be Creative 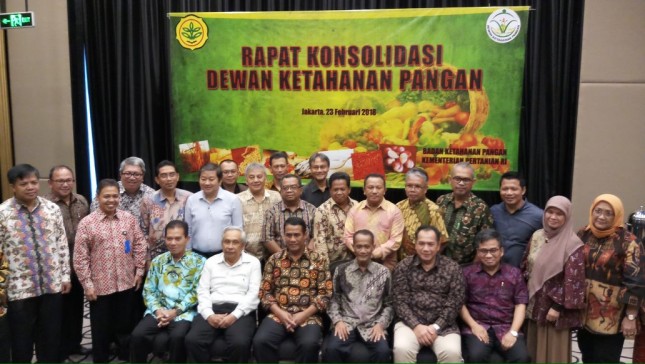 INDUSTRY.co.id - Jakarta - To reach Indonesia Becoming a World Food Barns, members of the Food Security Council (DKP) are required to be creative soon.

"All members of the Food Security Council need to have the best potential in each region and their respective expertise, so it must be creative, so it will get real proud results," said Agriculture Minister Andi Amran Sulaiman, during a briefing at the DKP Consolidation Meeting in Jakarta, Friday (23/2).

Amran Sulaiman also hopes that the members of DKP can provide interesting thoughts and ideas on how to provide food for the people.

"I am very happy and appreciate the thoughts and ideas that are presented, so that our food is always available and there is no starving population," said Amran in front of the members of the Working Group of Experts and Working Group on DKP Empowerment.

Minister of Agriculture who is also Chairman of Daily DKP, describes the various efforts that have been done in the last 3 years. Among them, the improvement of regulations is refocusing the budget on the productive sectors, agricultural modernization and so on.

"With the modernization of farming tools, there are currently 250,000 young people who are interested and plunged into farmers, this number will continue to increase, and is expected to reach one million people by 2019," said Amran.

In his report, Head of the Food Security Agency (BKP) of the Ministry of Agriculture, Agung Hendriadi who is also Secretary of DKP, said the Consolidation Meeting of DKP aims to formulate a work plan within the next year.

"Current DKP members are 60 percent new faces, and 40 percent are filled with members who have existed so far," said Agung.

According to Agung, the renewal of membership of the DKP Working Group (Pokja) to strengthen DKP in supporting the Government and the President as the Chairman of DKP, through the enrichment of substance in policy formulation.

"We are confident that the new Pokja team with experience and expertise can contribute significantly to support the consolidation of national food security, to evaluate the policies / programs implemented by the Government, and to provide implementative and solutive inputs," said Agung.

"Thus, it can accelerate the achievement of the development targets set by the President, especially in the field of food," added Agung.