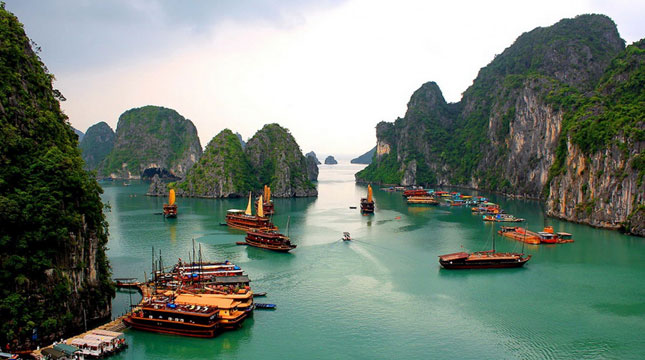 INDUSTRY.co.id - Vietnam - Indonesia's Tourism is more famous in the eyes of the world, various tourist destinations in various beautiful areas become the attraction of foreign tourists one of them tourists from Vietnam. This year, the Indonesian government is targeting the visit of Vietnamese tourists to Indonesia to reach 74 thousand people.

"The target of 74,000 Vietnamese tourists visiting Vietnam is believed to be achievable, in line with the country's increasing economic growth which has remained high in the last 10 years," said Ambassador of Vietnam to Ibnu Hadi at Vietnam International Travel Mart (VITM) 2018 at Hanoi International Center for Exhibition, Friday, (30/3/2018)

He explained that Vietnam's economic rate is always growing above 6-7 percent per year making the number of upper middle income population in the country continues to grow.

"In Vietnam nowadays there are many OKB (new rich people), these people must have high desire to fulfill the tertiary needs such as visit or travel abroad," he said.

Indonesia can take advantage of that opportunity. And increased access to direct flights from Vietnam to Indonesia will support efforts to attract Vietnamese tourists to Indonesia.

Ibn Hadi said so far the limitations of direct flight access became one of the obstacles in attracting Vietnamese tourists to Indonesia. Currently flights from Vietnam to Indonesia and vice versa should transit in Ho Chi Minh City first.

"Accessibility restrictions resulted in Vietnamese voting in favor of Thailand, Malaysia, China, Japan and Hongkong, as well as direct flights will also be more efficient in terms of cost and travel time compared to Indonesia," Ibnu said.

Head of Marketing Area IV of Indochina Region of the Ministry of Tourism Heri Hermawan said one of the characteristics of Southeast Asian tourists like Vietnam is often decided to travel abroad very quickly, unlike the United States and Europe tourists who tend to plan trips since the day.

Through tourism exhibitions such as TVIM 2018, he said, the ministry wants to attract Vietnamese tourists to Indonesia with various tourism promotions and supporting facilities.

He added that the ministry is also trying to attract Vietnamese tourists by inviting the media, industry and citizens to travel to tourist areas of Indonesia, holding an international celebration of Waisak Day at Borobudur Temple, and preparing destinations in accordance with the characteristic or preferences of Vietnamese people who prefer beaches, cultural and artistic attractions.