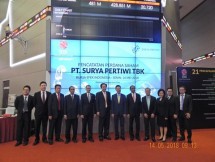 Net sales of that amount was contributed by the digital products business valued at Rp1.095 trillion and the rest came from a combined business between e-commerce and others which reached Rp34, 120 billion.

In terms of assets, Kioson has increased its current assets in 2017 by 5,881.8% to Rp219 billion. The surge in asset value is supported by several strategies and business expansions implemented by Kioson in 2017. One of them is the company's precise management that acquired PT Narindo Solusi Komunikasi, a leading e-voucher aggregator, contributing 88% of consolidated revenue STALL.

"2017 is the year that Kioson has made since its operation in 2015. The reason we did some business maneuvers in 2017 was the acquisition and became the first startup in Indonesia to register the shares on the Indonesia Stock Exchange," said Jasin Halim, President Director of KIOS, in Jakarta, Monday (16/04/2018).

Jasin said that the company's performance improvement by the end of 2017 is the result of the business strategy since early 2017 and the management of the company is optimistic that it will inculcate a more positive performance in 2018 with a focus on business expansion and technological innovation.

"In 2017, the company focuses on expanding its business and market expansion evenly in the second and third layer areas in Indonesia. As of December 2017, the move resulted in 30,000 micro, small and medium enterprises (UMKM) owners and spread across Java and Sumatra and has established partnerships with Kioson. It shows an increase in KIOS partners up to 400% compared to 2016, "added Jasin. (Abraham Sihombing)