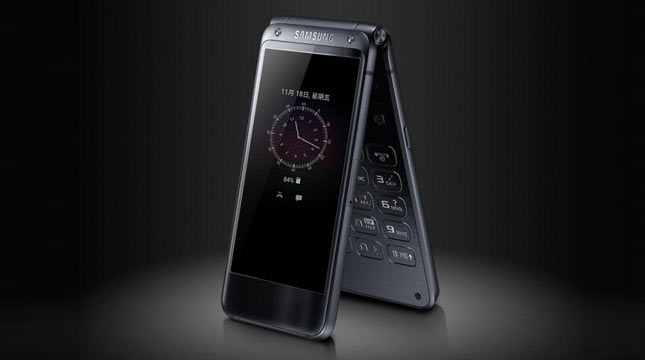 INDUSTRY.co.id - Jakarta - South Korean mobile phone manufacturer, Samsung launched a smartphone with the latest clamshell design in China, the SM-G9298. Previously, Samsung has released this type of smarpthone exclusively in for the Chinese market.

Although the flip model is less popular in recent years, Samsung still pair this smartphone with components or hardware above average.

Samsung SM-G9298 is powered by a Snapdragon 821 chipset that used several flagship smartphones in 2016.

In addition to 4 GB of RAM support, 64 GB of internal storage and microSD card slot (up to 256GB), the SM-G9298 is also equipped with a 12 MP main camera (f / 1.7 aperture) which is probably still equivalent to the main camera on Galaxy S7 and S8.

For the front side, Samsung only equip it with a 5 MP selfie camera (f / 1.9 aperture).

In addition to clamshell design, one of the real differences SM-G9298 with smartphones generally is two screens that are on the inside and outside. Both Super AMOLED screen types are measuring 4.2 inches with Full-HD resolution (1920 x 1080 pixels).

Either of them on the external display can be continuously activated, or referred to as 'always on display'.

Given SM-G9298 is still a classic nuance, Samsung still retains the arrangement of buttons (keypad) traditional or non-QWERTY long been abandoned modern smartphones.

Classic shades are also encountered on the use of a micro USB port (not a Type-C USB port) that is starting to be left on some of the latest smartphones this year.

Although SM-G9298 already supports wireless charging method to charge the battery with a small relative (2,300 mAh). Until now the new Samsung will market SM-G9298 in the Chinese market at a price that will be announced next.