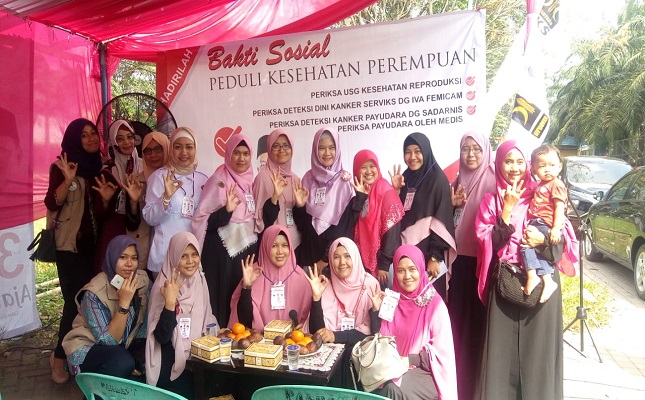 INDUSTRY.co.id - Cikarang - Women's Field and Family Resilience South Cikarang PKS hold social service care about women's health check up at Riski Clinic, Taman Sentosa Housing. According to the medical team social service  dr. Loonasulanta Spak, this activity in addition to socialization is also for the examination of women's health from an early age.

"We know that women's health is important because if sick women in the family, of course, the stability of households will be problematic," said this obstetrician, at Rizki Clinic, Taman Sentosa Housing Residence, Monday (17/4/2018).

Plus, according to the person in charge of the medical team volunteers Able from BPKK Cikarang south this cervical cancer is the most severe. He also added that such checks could reach 750 thousand per person. "Insya Alloh community is very helpful because this check is free," she said.

In line with dr Loona, Chairman of DPC PKS South Cikarang, Ronni Hasanudin said this social service actually there is whether or not the elections held by him.

"Firstly, there is baseball there is a pilgub, we always have a social service, at least once a month, but it happens today in South Cikarang District, Pasir sari Village," she said.

In essence, says Ronni, we educate and socialize the election of the governor to be held in a few months. "This is because it turns out when we surveyed, there are still some who do not know governor election," said this bespectacled man. In addition to socialization, also held a free social examination of social services.

"We are working with BPKK PKS, Volunteers Able and DPC Gerindra Cikarang Selatan," she said.