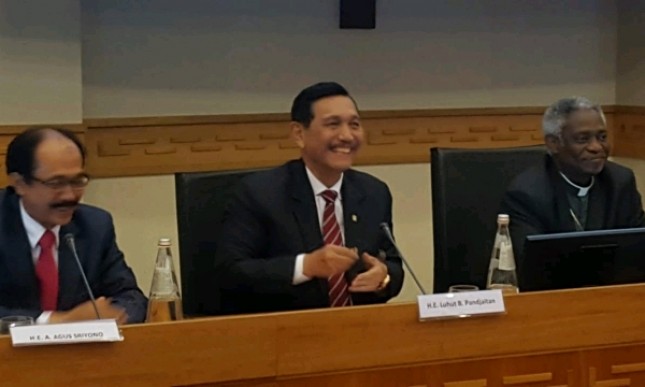 Coordinating Minister for the Ministry of Marine Affairs Luhut Binsar Pandjaitan gave a keynote address in the Seminar on Eradication of Poverty through Agriculture and Plantations for the sake of Peace and Humanity, in Rome, Italy.

INDUSTRY.co.id - Rome, Coordinating Minister for the Ministry of Marine Affairs Luhut Binsar Pandjaitan gave a keynote address at the Seminar on 'Eradication of Poverty Through Agriculture and Plantations for Peace and Humanity', in Rome, Italy (15/05/2018).

Inaugurating his speech, Coordinating Minister Luhut appreciated the cooperation of Indonesia, Malaysia and Dicastery for Promoting Integral Human Development under the leadership of Cardinal Peter Turkson, who has initiated the implementation of this seminar.

Cardinal Turkson said agriculture, including oil palm plantations, could be a business sector to eradicate poverty.

He advised that the balance between economic activity and environmental management must be maintained.

The conference is an important forum for exchanging ideas and dialogue among stakeholders representing governments, NGOs, academics and agricultural entrepreneurs including oil palm and civil society groups.

"We (the Indonesian government-red) there is no intention at all to 'use' the Vatican for opposition to any party," said Coordinating Minister Luhut.

Coordinating Minister for Marine Affairs Luhut went on to explain about Indonesia's economic growth which has shown good performance.

Over the last decade, the Indonesian economy grew an average of around 5.7%, the third fastest among the G20 after China and India. The Gini Ratio of Indonesia continues to shrink from 0.4 to 0.3 in three years indicating the success of the government's economic policy.

In fact, some institutions predict that in 2030-2050, Indonesia will become the world's fifth largest economy in the G20. "The economic performance is unlikely to happen without a significant contribution from the Indonesian agricultural sector," he said.

"In 2014, the agricultural sector employs about 40.12 million people, or about 33% of Indonesia's workforce," Luhut said.