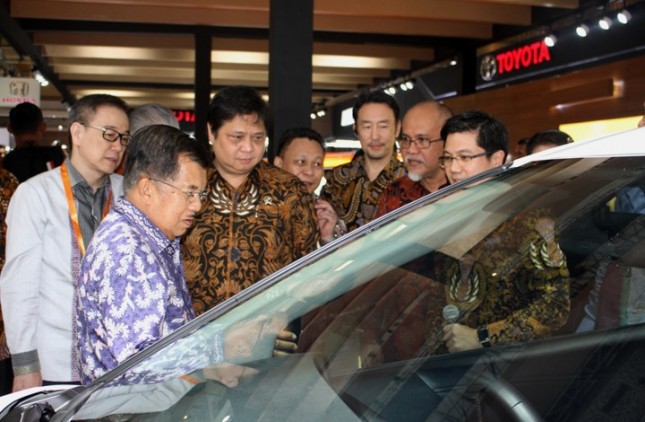 Minister of Industry, Airlangga Hartarto with Vice President Jusuf Kalla when he saw one of the cars in IIMS 2017

With the theme 'Rise of the Future Mobility', of course, treat a variety of vehicles with the latest technology so the main menu for visitors to see. At least, 32 car brands and 10 motor brands are ready to enliven. Even more than 40 new vehicles were launched.

GAIKINDO Indonesia International Auto Show (GIIAS) 2017, is an official international-scale automotive exhibition owned by GAIKINDO, which has been acknowledged by the Organization Internationale des Constructeurs dAutomobiles (OICA). GIIAS 2017, as the title that has entered into the world automotive calendar, this year again present precisely on 10-20 August 2017 at Indonesia Convention Exhibition (ICE) BSD City, Tangerang.

As an international-scale automotive exhibition that put forward the advancement and development of automotive technology, GIIAS, become an appropriate event to educate industry players to realize the developments that have occurred in the global automotive world.

"The achievement is expected to further boost the contribution of the automotive sector to the national economic growth," said Airlangga.

Based on Ministry of Industry records, in 2016, the contribution of the transportation equipment industry sector (including the automotive industry) to GDP of non-oil industry sector reached 10.47 percent.

Airlangga is optimistic that the performance of the domestic automotive industry is able to grow better in line with Indonesia's product market potential and positive national economic growth. This is driven by the recovery of the global economy and the development of comprehensive structural reforms in the country.

GIIAS 2017 exhibition will take place on August 10-20 at ICE BSD, Tangerang. For those of you who want to come, can take advantage of the free shuttle bus facility in five locations: Q Big, The Breeze, AEON Mall, Rawa Buntu Station and Bintaro Xchange. The admission price is pegged exhibition Rp 150 thousand for VIP & Press Day which took place Aug. 10, then 50 thousand for Monday-Thursday and Rp70 thousand for Friday-Sunday and national holidays.