Inapgoc Set Up Arrival and Departure of Athletes 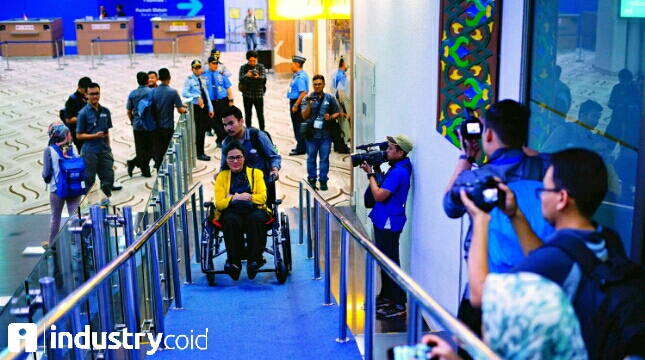 INDUSTRY.co.id - Jakarta - The preparation for the 2018 Asian Para Games title continues to be maximized by the Inapgoc committee. One of the focus is to strengthen the arrival and departure of the participating athletes.

For that, Inapgoc held a simulation of the arrival and departure of the participating countries of the 2018 Asian Games. Simulations were conducted on Tuesday (5/6/2018) afternoon until late afternoon at Soekarno-Hatta Airport. Started briefing at the airport authority office and also the manager of Angkasa Pura II in the airport office area.

Activity is then continued with the arrival simulation at 2D terminal starting from arrival until departure.
This arrival and departure simulation becomes the preparation for Inapgoc towards the Asian Games.

Not only the readiness to accept the arrival of athletes who will compete, the moment is also as a consolidation of coordination with relevant agencies.

"This simulation is also a monitoring of the readiness of the event arena Test Event which will be held on June 24 next using terminal 2 and 3. We check all arrival lanes at Soetta Airport and ensure the tools of disability support that will be used by athletes," said Andrianto Soedjarwo as Director Arrival & Departure Inapgoc.

To test the Asian Para Games event on June 27 until July 3 later, according to Andrianto there will be different arrival terminals athletes. Because, international flights to date have not been centralized in terminal 3.

"If the test event, it will be divided into two arrival terminals or departure, we have seen there will be additional and repair facilities are less," he said.

Meanwhile, the Head of Airport Authority Region I Soekarno Hatta Bagus Sunjoyo ensure that there will be special tracks prepared during the test event and games times.

"It is estimated there will be 3000-4000 Asian Para Games athletes will arrive at Soekarno-Hatta Airport, and there are special lanes that will be accommodated all their needs including the transportation of goods and equipment to compete," he said.