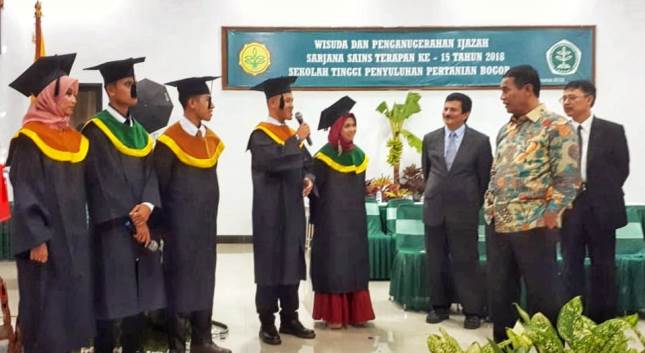 INDUSTRY.co.id - Bogor - Minister of Agriculture Andi Amran Sulaiman invited scholars in agriculture to not hesitate to become farmers, entrepreneurs in agriculture, and develop the knowledge possessed for Indonesian agriculture. This was conveyed by Amran when giving a speech to the graduates of Bogor Agricultural Extension College (STPP).

"After graduating, try to find one hectare of land, there can be the best rice planting, maintain the best fish and duck so that it becomes a model for farmers around and can be developed," Amran ordered in his first visit after performing the Hajj on Wednesday (29/08).

"Be independent, work and utilize the knowledge that has been obtained," continued Amran.

Amran reminded that agriculture is very promising in the future. The need for agricultural products, including food, will continue to grow in the future; many conglomerates will be born from agriculture.

Not only giving motivation, Amran stated that personally the consistency and dedication in agriculture was parallel to his life's journey. Since childhood, he had been educated to work hard starting to sell Rock Mountains, maintain several cows, become an employee at PTPN until he became a businessman and finally the minister of agriculture.

"The bitterness of life in those days became the temptation to be a strong, optimistic and unyielding person. Until finally becoming a Minister," said Amran.

The Minister of Agriculture does not want the next generation of agriculture to be lost and proud to go to the fields. He also took the time to dialogue with a number of graduates and provides assistance for 4 units of hand tractors as the chosen capital for the graduates. "Don't look for work abroad or feel enough to only become employees, on the contrary, let's build and develop our beloved homeland agriculture, as an agricultural and fertile country," said Amran.

In this impromptu tour, Amran deliberately gave a surprise to the graduates, parents of graduates and even officials and lecturers in attendance. Initially, the graduation ceremony was only attended by the Iwantoro Ministry of Thanksgiving Secretary General, but once told that there was an event Amran was spontaneously eager to attend and provide motivation.

Previously Amran had visited the exhibition stand of organic agricultural products produced by students. Accompanied by the Secretary General of the Ministry of Agriculture, the Head of the BPPSDMP Office, and the Chairperson of STPP, the Minister of Agriculture also took pictures with the Graduates and Lecturers.