Merah Putih Fluttering from Under the Sea at Tanjung Lesung 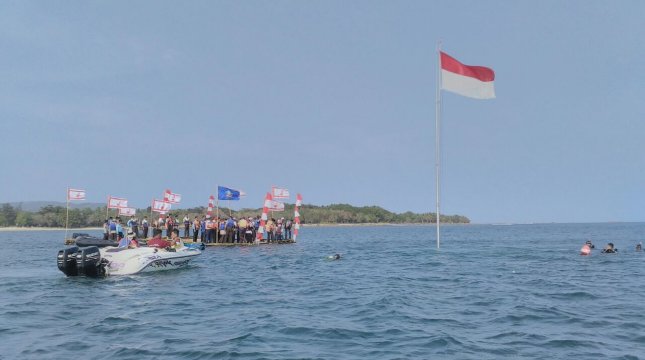 Raising the Red and White Flag from the bottom of the sea for the 72nd Anniversary of the Republic of Indonesia was held at Tanjung Lesung Beach, Banten, Thursday (17/08/2017). (INDUSTRY.co.id/Irvan AF)

INDUSTRY.co.id - Pandeglang - The flag raising ceremony in welcoming Indonesia's 72nd Independence Day, Thursday (17/08/2017), was held from under the sea at Tanjung Lesung Beach, Pandeglang, Banten. The flag hoisting was carried out by the Saka Bahari Scout assisted by the Naval Base.

The flag-raising ceremony which took place at around 09:00 am was solemn with the raising of the Red and White Flag from the bottom to the water on the flagpole 17 meters long by 17 divers Saka Bahari consisting of scout level to pandega.

Just as the flag is one to two meters above sea level, the national anthem of Indonesia Raya is sung by hundreds of ceremonial participants who are on artificial island in the middle of the waters and the beach lips of the Special Economic Area of ​​Tourism managed by PT Banten West Java.

"We are very proud and happy about this because this is the first time done by Scout Saka Bahari," said Daily Chief Kwartir Banten Cepi Syafrul Alam who also acts as a ceremony coach at the ceremony site.

The flag raisers spent about three months preparing for the flag ceremony from within the sea, including on-site trials for two weeks.

The Kwarda Banten hoped that this flag raising ceremony could motivate the Boy Scout members, especially the raising level to foster the spirit of nationalism and their interest in a positive activity.

"Including awareness raising to preserve the nature of the Scout members," said Head of Evaluation and Development of Regional Working Council of Kwartir Daerah Banten Oki Fathurrohman at the same location.

The ceremony was also attended by representatives of Banten Regional Government, Danlanal Banten, Danlanud Halim Perdana Kusumah and Danlanud Atang Sanjaya, ending by choreography of 91 members of the Scouts of Kwarda Banten on the water of Tanjung Lesung beach.