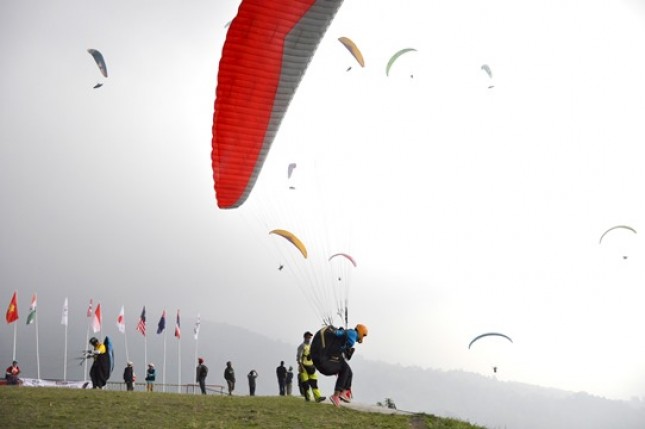 In the midst of cloudy weather, a participant of the 2017 Trophy Parallian World Cross Paralayang, taking off at Mount Mas Ronde I, Saturday (12/8). (Photo: TAGOR SIAGIAN / HUMAS FASI)

Chairman of the Organizing Committee of Paragliding Sugen Festival 2017 Agus Ramli at Gunung Kidul, Saturday (26/8/2017) said the activity started the official exercise on Friday (25/8). While the match or race, Saturday (26/8) and Sunday (27/8). The participants come from DIY, Bali, East Java, Central Java and Jakarta.

"The race starts from the top of Sriten and finishes at the Wotgaleh field, Nglipar," he said.

He said the assessment of the race was done regarding the speed of the participants to the coordinate point in the Wotgaleh field. Along with this event, enlivened cultural carnival, performances campursari, sendratari, reog and jathilan in Embung Sriten, Sunday (27/8).

Embung Batara Sriten is a suitable place as a vehicle for paragliding. The altitude of a hill nearly 900 meters above sea level becomes a sexy location for paragliding athletes.

"Paragliders can be flown with a height of up to 1,500 meters. Other advantages, paragliding can be done during the summer along with east and south winds," he said.

Secretary of Tourism Office of Gunung Kidul Hary Sukmono said it appreciated the implementation of paragliding festival. So that can make its own attraction for tourists.

"Previously a lot of activities centered in the south, now with the many activities on the north side, it will evenly visit tourists, including raising the potential in Nglipar District," he said.

"Paragliding is a relatively new sport, it needs the support of all parties, so it brings a good impact for Gunung Kidul tourism," he said.