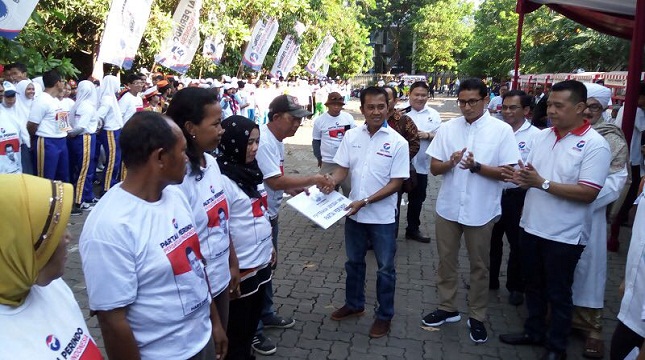 "This event is part of the development of the Perindo Party, we want to keep young people away from glamorous lives, we want to divert into productive lifestyles, they must be far from drugs for destroying their future and nation," Rofiq said at the North Jakarta Youth Arena, Jakarta, Saturday (9/16/2017).

Rofiq added, this kind of activity should be an example for other Perindo area managers, so that it can provide a channel of creativity for young people.

"We want this to be a role model, DPD in DKI Jakarta should do productive activities like this, besides we want to make Perindo a party of young people, so hope the nation's children," said Rofiq.

According to Sandi, this event is important to generate togetherness and friendship among the people so that they can avoid the dangers of drugs and other negative activities such as brawl.

"With this kind of activity their energy will be focused on activities that generate togetherness, generating friendship, so if they are not channeled then they will be fighting, drugs, and with this activity they are trained," said Sandi.

At the same time, Kartini Perindo as a party wing organization also held a social event. This time, North Jakarta residents get a total of 1.25 tons of free rice.

"Kartini Perindo is delighted to be participating in the event of Merdeka Gema, we have brought 500 packs of rice as much as 2.5 kg which we give to the people who deserve it. Today is free of all," said Vice Chairman of Kartini Perindo, Ratih Gunaevy at North Jakarta Youth Arena.

Evi (35), a mother living in Kelapa Gading sub-district, North Jakarta, expressed her happiness when she got the rice that was distributed free of charge.

"Alhamdulillah this can be free rice.Insha Allah is useful for my family yes," said Evi who came with two children.