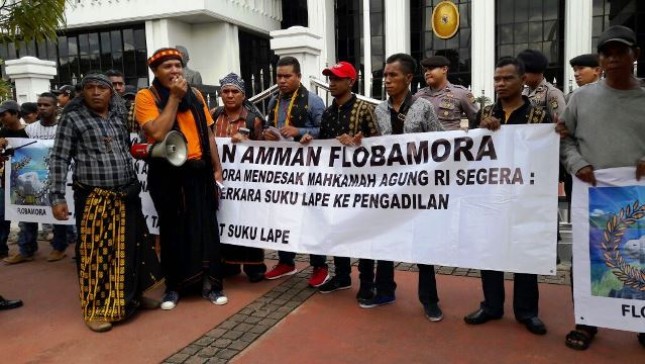 They urged the Supreme Court to send a copy of the verdict of Number 1574 / PDT / 2017 dated September 19, 2017 to PN Bajawa which refused the appeal of the defendant, Nageko Regent Elias Djo who requested the Supreme Court of Justice in Nagekeo Parliament building case could not be executed.

Secondly, the Supreme Court must order the Chief Justice of Bajawa District Court to immediately execute the case of Nagekeo parliament building which has been in permanent legal status (inkracht).

Chairman of Compact NTT Gabriel Sola said in his speech that the execution of the Nagekeo Parliament building was not immediately executed, so first, Elias Djo and his deputy Paul Nuwa Veto were most responsible for the case as the defendant in the case was confident to step forward as a candidate for the Bupati Nagekeo period 2018 - 20123.

According to Gabriel, with the incracht of the case, these two men must be criminally responsible and go to jail. Because of the decision of Elias Djo and Paul Nuwa Veto (as the Chairman of the Nakegeo Parliament at that time) caused the state to lose Rp 10.3 billion to build the Nagekeo Parliament building. "Not including the money to buy the land to the wrong people," he said.

Secondly, with no execution of the building then the benefit of law and legal certainty does not exist. "We urge the Supreme Court to immediately order the Chairman of PN Bajawa to immediately execute the Nagekeo Parliament building," he said.

Thirdly, if the Nagekeo Parliament building has not been executed then the court image will be further damaged. "The authority of the court is also damaged. The inkracht decision has not yet been executed," he said.

Fourth, has not been executed Nagekeo Parliament building then people suspect the PN Bajawa received bribes alias disogok by Elias Djo the mouth of the bribe in the MA. "In order to assume like this does not exist, immediately execution," he said.

During the rally, protesters unfurled banners and posters that read "Immediate execution of Nagekeo Parliament building", "MA and PN Bajawa do not want to be bribed so that the case is not executed", "Immediately send a copy of case verdict Number 1574 / PDT / 2017 dated 19 September 2017 to PN Bajawa "," Restore the Ulayat Right of Lape Society ". The event was guarded by hundreds of police officers from the Central Jakarta Police and Polda Metro Jaya.

About 30 minutes they rallied, the Supreme Court asked five of their representatives to meet the MA representative in the 1st floor of the MA Building.

Five representatives of protesters were received by the Civil Registry Supreme Court, Prim Hariadi. Prim Hariadi said the copy of the decision of the case Number 1574 / PDT / 2017 dated September 19, 2017 is still in the hands of three judges who decide the case. "However, I promised that I would immediately meet the three judges so that a copy of the verdict was immediately sent to PN Bajawa," he said. Subsequently, the protesters dispersed.

But NTT Compt's Division Head of Law, Paul Kune asserted, if the Supreme Court does not immediately send a copy of the verdict of the case, then Compt NTT will occupy the MA building.

Land dispute area of ​​15,000 square meters or 1.5 ha. On the land has been built parliament building worth Rp 10.3 billion. The building has not been completed and until now it is still sealed by the plaintiff.

The case has passed (a) the District Court (PN) of Bajawa, (b) Kupang High Court, and Supreme Court (MA) for appeal and review. Everything was won by the plaintiff.

Since the Supreme Court's decision is only declaratory, the lender filed a new lawsuit to the Bajawa District Court for the decision to be executed (condemnatoir). PN Bajawa granted the plaintiff's request.

Feeling no other way in the legal path, the defendant asked for a peaceful way to deposit consignment money in PN Bajawa for Rp 2.5 billion, but PN Bajawa rejected the request of the defendant.

The road is dead-end. Plaintiffs no longer want to make peace because the mighty journey is too long, long, and exhausting. Every stage, the plaintiff always asks for a peaceful road never to ignore. Thus, the execution of the Nagekeo Parliament building should be done immediately.