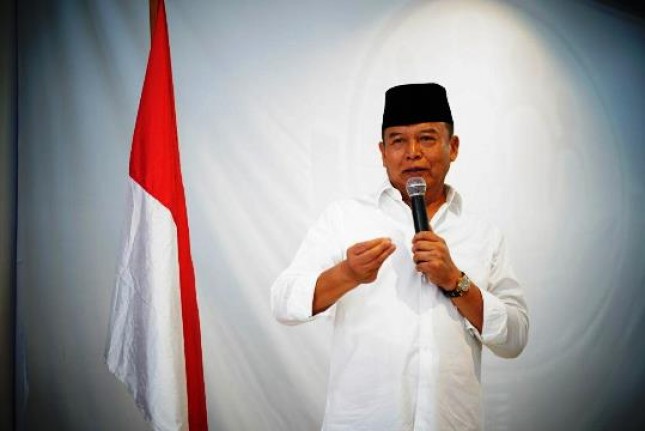 INDUSTRY.co.id - Bekasi - Governor Candidate (Cagub) West Java Tb Hasanuddin (Kang Hasan) emphasizes the importance of tolerance towards others and respect each other's differences. According to him, Pancasila as the basis of the state should be our reference to coexist without discriminating against each other.

"Pancasila should be our guidance that any tribe, race or religion has the same right to live and must live side by side" he said when meeting with interfaith leaders in Puskopdit Building, Pancasila Village, Pondok Melati Sub-district, Bekasi City. Saturday (27/1/2018).

As one of the many diversity areas, Kang Hasan continued, People must make a difference as a force to build West Java area for more advanced

"There is no opposition, there is harmony, mutual love, mutual respect.

Kang Hasan added that every citizen has the right to choose his or her own beliefs without any hatred just because of different beliefs. So there is no more conflict but life as a brother of country and country.

"all citizens of the Republic of Indonesia, especially the people of West Java must maintain peace and have equal rights for the welfare of each" Clearly

Previously, Kang Hasan visited Yayasan Pendidikan Fisabilillah (YASFI) in the same area, and was welcomed by YASFI Chairman Kiai Haji Rochmaddin Afif. Kiai Rochmaddin also had time to pray for Kang Hasan to be able to expand the mandate of the people of West Java when elected later.

"Being a leader is a great gift and responsibility Jawa, I wish Kang Hasan be given the best and able to inflate the mandate" he said.

On that occasion Kang Hasan accompanied Waras Wasisto Chairman of West Java Legislative Fraction, Anim Imadudin Chairman of DPC PDI Struggle and Hermas, Chairman of the PDI Faction of the City of Bekasi.