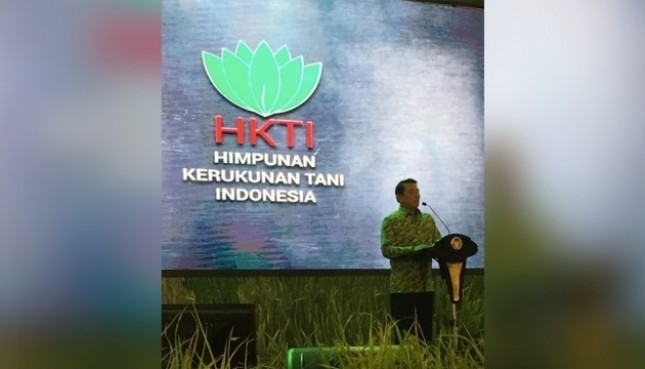 "There are five problems of farmers, the first land is narrower, the two problems of capital, the three technologies, and the management and post-harvest," Moeldoko said at the HKTI 2018 Conggress held at the Krida Bhakti Building, Jakarta, Monday (30/4/2018).

Moeldoko, who is also the Chief of Staff of the Presidency, said that in addition to the increasingly narrow land ownership, agricultural land is also damaged due to excessive use of pesticides and fertilizers.

Farmers also find it difficult to get capital to increase their production so that their life depends on the middlemen.

Chairman HKTI also highlights the post-harvest problems faced by farmers, that is, the production is absorbed by the middlemen at the lowest possible price, so the profit of the farmers is not too much.

On the same occasion, the Expert Staff of the Minister of Agriculture (Mentan) for the Environment Section, Mukti Sardjono, said that the conversion of large agricultural land and the declining land ownership of farmers are also two of the four constraints faced by farmers.

Ownership of peasant land generally does not reach one hectare. In order to increase food production, the Ministry of Agriculture also optimizes suboptimal land, such as swamp land.

"The plan is for swamp areas to be optimized for more than one million hectares, especially in South Sumatra and Central Kalimantan," Mukti said.

The HKTI Congregation is attended by the Regional Board (DPD), the District and City Board (DPK), the Autonomous Agency and the wing organization HKTI: Youth Farmers of HKTI and Women Farmers HKTI. (ant)