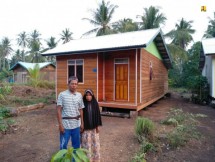 INDUSTRY.co.id - Purbalingga-Minister of Agriculture, Andi Amran Sulaiman, launched the Working Poverty Surgery Program (BEKERJA) in Sangkanayu Village, Mrebet Sub-district, Purbalingga, Central Java. Purbalingga District became the location of the three targets of WORK Program after Kabuoaten Cianjur and Magetan District.
Amran, assess, Purbalingga District Government efforts to eradicate poverty in the region is quite good, but need further efforts to ensure the poverty rate is reduced.
"We have built a good house and now it is continuous economy," he said in Purbalingga, Tuesday (8/5/2018).
The sustainable economy, he added, is done through collaboration with the WORK WORK Program.
The WORK program is a Ministry effort to eradicate poverty in the country based on agriculture with three stages, short, medium and long term. Overall, this policy will be held in 1,000 villages in 100 districts throughout Indonesia.
Each prosperous household received 50 chickens, two goats / sheep, and 20 rabbits. Assistance chicken livestock equipped with cages and feed for six months. There is also assistance in the form of seeds of horticultural commodities and plantations.
Amran explained that the underprivileged community is a community with revenues of around Rp 1.4 million per month which he believes will increase his income to Rp 2.5 million per month, if the livestock provided is well managed.
"Chickens are able to lay eggs at the age of six months and produce up to the age of two, which is important not to cut," advises Amran. To ensure the chicken breed well, Kementan also provides feed assistance for six months and mentoring.
In addition to economic value, chicken assistance can also help improve the nutrition of pre prosperous community. A total of 10 of the 45 villages left in Purbalingga District experienced "stunting".
A total of 11,519 households in Purbalingga are in the pre prosperous category. They are spread in District of Mrebet, Kaligondang, Kutasari, and Rembang.
Minister of agriculture also provides assistance in the form of annual crops, such as fruits. Amran hopes that the community will build clusters in every 3 - 5 districts.
Each cluster planted one type of plant. That way we encourage industry presence. "So, we want to build economies of scale," he explained.
Economic-scale development is the main goal of the WORK Program. The reason, poverty will be reduced when the wheels of the economy move. "Once we leave poverty, poverty does not happen again because we are used to produce," said Amran.
For information, the Central Bureau of Statistics (BPS) said, the poor population in September 2017 amounted to 26.58 million people (10.12 percent) or decreased compared to September 2014 of 27.73 million people (10.96 percent). Of the 26.58 million people, 16.31 million poor people (13.47 percent) are in rural areas.
Besides Purbalingga Regency, the Ministry of Agriculture also targets Banyumas and Brebes districts as the location of the WORKING Program in Central Java Province. The total number of beneficiaries was 48,915 households / poor households in 176 villages in 12 sub-districts in three districts.
The following details of assistance of the Ministry of Agriculture in Kab. Purbalingga includes:
1) 1,000 chili seeds
2) 280 various vegetable seed sachets
3) 1,000 banana tree seedlings
4) 100 durian tree seedlings
5) Controlling plant pest organism (OPT) in the form of 80 kg trichoderma, 100 liter PGPR, and one hand sparayer
6) Sustainable Food Bars (PPB) worth Rp250 million
7) 475 thousand chickens
8) 20 goats
9) 20 chicken coop