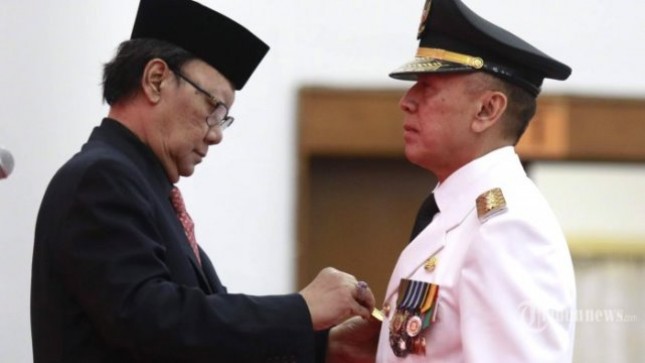 Tjahjo explained the withdrawal from the active service as described in Article 109 and Article 110 of Law no. 5/2014 on State Civil Apparatus as well as Article 157 and Article 159 of Government Regulation no. 11/2017 (civil servant management), actually has been described in Article 1 number 3 PP. 1/2003 on Dismissal of Polri Members, which affirmed that all official activities conducted by members in the police institution.

According Tjahjo, Iriawan currently is a JPT Madya as Sestama Lemhanas so that the concerned no longer serve active in the police institution.

Reason Iriawan not resign, said the Minister of Home Affairs, in addition to the above explanation, also as mandated Article 9 letter PP. 21/2002 on the Transfer of the Status of TNI / Polri Members that the assignment of TNI / Polri to certain agencies does not need to transfer the status of civil servants.

"Thus the status is still a police officer but no longer active service for getting the assignment as Sestama Lemhanas," he explained.

Tjaho stressed, because Sestama Lemhanas is a JPT Madya then Mr. Iriawan qualified to be acting as Acting Governor of West Java as mandated Article 201 paragraph (10) of Law no. 10/2016.