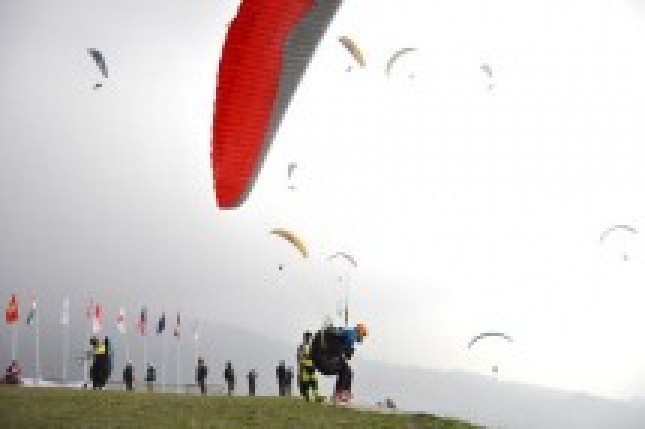 INDUSTRY.co.id -Cisarua- Unfriendly weather for aerospace sports, causing the participants of Asia Cross Country Paralayang II 2017 Trophy in Gunung Mas, Puncak, West Java not have a maximum results in Round I, Saturday (08/12/2017). The championship is intended as a test of location and device of the Asian Games XVIII 2018 Indonesia competition, will last until Monday (14/08/2017).

As the Race To Goal race number, 101 pilots (for aerospace sport athletes) from 12 countries, must fly over some point in the fastest time. However, due to low wind speed when flying, 10 km / h and overcast weather, resulting in all participants no one to solve the problem as far as 8.3 km.

The Competition Director Igor Erzen of Slovenia, who is the Vice President of the FAI (International Aeronautical Federation), the world's aerospace sports parent, Gantolle Field and Paragliding, has reminded the participants during a technical meeting Friday night (11/8) In Puncak, can not follow cloud (cloud flying) when flying.

That is, the pilots are not allowed to intentionally enter the clouds to increase their height. Due to cloudy weather so that the cloud's height is lower, many participants are unable to fly far. Though the main requirement of a pilot's success in cross country numbers is flying as high and as far as possible.

After the Open Window (the race opened) at 11:30 pm, the pilots waited for nearly three hours, because wind speeds range from 3-5 km / h and are inadequate to take off. Once the wind speed is good, South Korean pilots are scattering into position. The members of Pelatnas (Indonesian National Training Center) for Asian Games 2018, following behind.

But only 10 minutes they flew together after getting thermal (hot air carrying a higher parachute), a group of about 16 pilots, sucked in a rain cloud. Worried by the lightning, they immediately break away, out of the clouds. As a result, their parachute is declining.

As happened to Pelatnas Pilot Jafro Megawanto. Having made it through one of the points in the Safari Park Zoo, he was forced to land hard on a tea plantation in the landing area for the Landfall Accord number. Worried about a back injury or tail bone, he was taken to the nearest hospital for X-rays. But the result was good and he was allowed back to the athletes' lodging.

"I got the wind from the back and my face started to rain. My parachute is falling. But I can fly tomorrow, "he said with a smile on Tagor Siagian, Public Relations PB FASI (Executive Board of the Federation of Aero Sport Indonesia).

In the Round II contest on Sunday (13/8), the question will be re-adjusted weather and wind conditions in the morning ahead of Open Window (Opening Competition) .. If possible, the pilots may be required to fly up to Sentul, as far as 15 km.

In his opening remark during the opening of the Asian Cup II on Saturday morning (12/8) in Puncak, West Java, President of Aero Sport Asia Federation (ASFA), Dr. Mubarak Al-Suwailem praised the participants for having recorded a new history for Paragliding.

"For the first time Paragliding successfully participated in the 2018 Asia Games multiplayer event. You paved the way for your children and grandchildren to join the Asian Games. You also gave the Paralayang hope to join the Olympics! "He said to the applause of the pilots.

Mubarak promised that ASFA will not only focus on increasing the number of championships in the Asian region. But it also educates and enhances the technical abilities of athletes through sports science, sports science and technology.

Like the Paralayang cross-country technique clinic that was held before the Asian Cup given a reliable European pilot. It would be very beneficial for Asian pilots to be parallel even beyond the achievements of Western pilots for a long, not seasonal period.