President Jokowi and US Secretary of State discuss Bilateral Issues 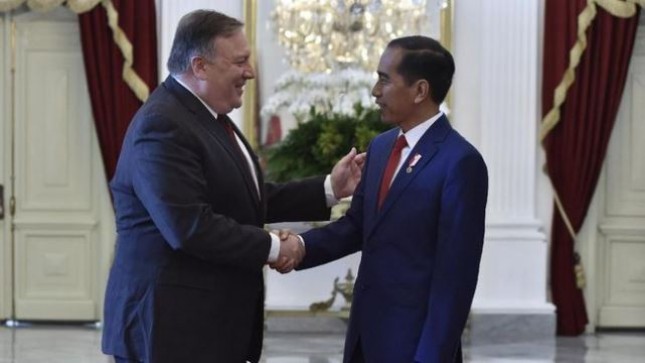 INDUSTRY.co.id - Jakarta - President Joko Widodo met with US Secretary of State Michael Richard Pompeo at the Merdeka Palace on Sunday (08/08/2018) to discuss a number of bilateral and international issues.

"On this occasion I will use it to further discuss bilateral and international issues," President Joko Widodo said at the Merdeka Palace in Jakarta on Sunday.

"I also received a report from the visit of the Minister of Trade and business delegation to the United States," added the President.

"We are also proud that democracy is growing rapidly in Indonesia, the challenge faced by all nations today is that how to maintain diversity with each other and respect and indeed I continue to develop diversity," said the President in Indonesian.

While Foreign Minister Pompeo praised Indonesia as one of the United States' strategic partners.

"I thank you for accepting me here and I just want to say that Indonesia is a strategic partner of the United States and we appreciate the growth of democracy in this country, democracy is something that is highly valued in America," Pompeo said.

Pompeo visited Indonesia on August 4-5 2018. This visit was the first visit of Pompeo after being sworn in as US Secretary of State on April 27, 2018. The former CIA Director had previously visited Malaysia and Singapore.