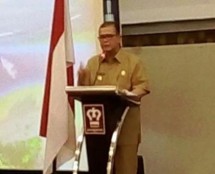 Vice Governor of West Sumatra: If Only One Person to Padang City, That Is Failure For Us

HPN 2018, The Resurrection of the Press Gives a Positive Impact to Democracy Life

INDUSTRY.co.id - Padang - Governor of West Sumatra Irwan Prayitno emphasized that people should understand that renewable energy is the future of Indonesia's energy security, replacing fossil energy that began to decline.

"This energy is also more environmentally friendly than fossil energy such as oil and coal," he said in Padang, Thursday (2/11/2010)

He said that in a Seminar on Forestry Sector Support in the framework of Renewable Energy Development in West Sumatera.

According to him the potential of renewable energy in the area is quite a lot of water, biomass, sun, geothermal, wind, ocean waves, and biogas.

Specifically for geothermal based on research there are 16 geothermal hotspots in seven districts and cities in this area with total potential electric energy that can be generated reaching 1,656 megawatts.

While the water energy for Mini Hydro Power Plant (PLTMH), West Sumatra has a considerable flow of rivers. Widespread forest support to ensure the availability of water resources is also sufficient.

But most of the potential, according to him, has not been maximized to be developed due to budget constraints owned by local government. Need investor support in order to provide benefits to the region and the community.

"Now only give understanding to the society, that the West Sumatera Provincial Government seriously develop the existing potential and expect the community to support the program," he said.

One form of seriousness that according to him is the understanding with the West Sumatra Police to keep the parties are not responsible for disrupting the development of renewable energy in the province.

Related to the seminar that was held, he gave appreciation, especially to socialize the importance of renewable energy.

Meanwhile, Head of West Sumatra Forestry Office Hendri Oktavia said the activity was done to anticipate the declining of Indonesia's energy security which has been supported by fossil energy.

He said the need for special attention on renewable energy, especially forest-based to help sustain the energy. (Ant)