Five Excellences Titiek Soeharto As Chairman of the Golkar Party 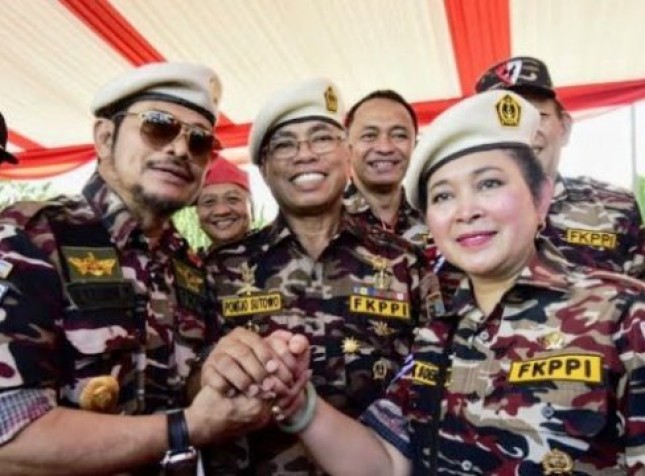 INDUSTRY.co.id - Jakarta - In the Golkar Party's current cross, there is a figure whose capability can act as a rehabilitator, and that ability is not owned by another Golkar Ketum candidate.

The advantage that will be able to change the existence of Golkar party in the era of mass base become increasingly accepted society and again have an important role in the not too long.

In the notes of the Golkar Party's Golkar Reform Movement, these advantages are attached to Titiek Soeharto, among others:

First, Titiek Soeharto gained trust in the society's view. It can be said of the majority of society, especially the middle to lower society. This trust is a socio-political-economic-community network that not only builds on the inheritance of its parents --- President Soeharto who has been rooted for 32 years --- but also built himself through a series of social activities before entering politics (as a member legislative Golkar Party) and after sitting in parliament.

Some people assume this trust is gone, because of the vigorous analysis of a number of political elites who always waged hostilities against the family of Pak Harto.

But in truth the trust is still well groomed (from Sabang-Merauke) and if at any time this mass network is turned on, it will manifest as a great political force. Only by placing the Soeharto family in a political superstructure, this trust can be capitalized in a political movement.

As has been the case before the legislative election of 2014, among the pesantren who traditionally have historical relations with Pak Harto, the term "Family of Pak Harto Yes, Golkar No" responds to the Titiek Soeharto scenario. The message implies that it will only give the trust as necessary (voting in moderation), unless Titiek Soeharto or Pak Harto's family controls the Golkar Party.

This trust refers to the belief that the family of Pak Harto has better leadership genetics in holding the mandate for the national struggle, rather than the pragmatic behavior of this era. But the trust will only be channeled in the necessary levels to the right figure.

Unfortunately the Golkar elite is less quickly aware of this potential, to inflate its vote. Golkar has wasted that potential. Golkar has not placed Titiek Soeharto as a figure and used it as a networking mass.

Golkar in the reform era has only Akbar Tanjung as an entrenched figure. Not only internally accepted Golkar party, but also cross community elements so that it can bring Golkar has a majority in parliament.

Akbar is a proud former student activist. Not only capable of internal communication with Golkar, but also elements outside it.

Jusuf kalla and Aburizal Bakri are entrepreneurs’ figures, have financial instruments, but are less rooted to the lower levels. Both of them ultimately failed to bring Golkar into a majority, despite the support of a good media campaign budget.

In addition to these three figures, Golkar in the reform era was inhabited by "cadres of beards", cadres who hung on political tractionist skills, but did not take root in the community.

Now Golkar again has a deep-rooted figure, in Titiek Soeharto. Just want to capitalize for the bubble / glory of Golkar Party or not. Depending on the Golkar people they understand the reality of the present and the future.

Second, the momentum sparked the public's longing for the success of the New Order's development. At the beginning of the reform, the new order was perceived as the "old age". But right now, after nearly 20 years, the pendulum is moving to build a new antithesis, which the "corrupt and pragmatic behavior" of reformation era is now beginning to be perceived as "old age" by the generation of "the present".

The public today wants change, from corrupt-pragmatic behavior of the reform era, to return to the purity of the nation's struggle based on Pancasila.

The corrupt and pragmatic behavior of the reform era has now become the "old behavior" of the "old generation" to be replaced by the "now now" renewal of the sincerity and consistency of the nation's development struggle pursuant to Pancasila.

The longing for the glory of the nation's development (the New Order era), where Golkar is in it as the main supporter of development, can only be capitalized by the right people, and in the figure of Golkar Party today attached to Titiek Soeharto. It is a new hope for the renewal of the reformation era deviation.

Reform is a necessity, but the deviation from the spirit of Pancasila (lacking sovereignty, justice, equity, pragmatic behavior, not the interests of the small people) in nation building, is one thing that must be corrected as well.

Third, Titiek Soeharto is not part of the complications of political factionalization during the reform. Titiek Soeharto was not in the "hostage" of the internal factional conflict of the Golkar Party during the reform era. So that its existence can bring a new atmosphere to escape from the factional conflict so that Golkar energy can focus to raise the party.

Fifth, Titiek Soeharto is an independent figure in all aspects. He is not a politician whose political movements depend on the state budget. He is also not a person whose economic resources rely on political activity.

The independence of its existence will release the Golkar party from various hostages. As we know most politicians today, whose political movements, even the economic supporters rely on the state budget.

Now is the time for Golkar DPD-DPD to determine its future. Will be the party number two or even slumped, or will rise to the winning party. Hopefully Golkar Party succeeded in choosing a new leader who is rooted in the people.