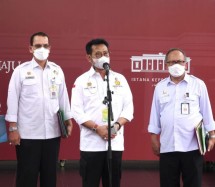 INDUSTRY.co.id - Garut - Minister of Agriculture Andi Amran Sulaiman held a rice harvest in a 764 hectare land of 2,400 hectares in Mancagahar village, Pameungpeuk sub-district, Garut regency, West Java, on Tuesday (6/2/2018). The event was held following the fall of grain prices at the farm level.

"Here we were discussing with farmers down Rp700 per kilogram," he said during the event. He said, the trend also occurred in a number of production centers, such as South Sumatra, Central Java, and East Java. In fact, in Sukabumi grain prices reached Rp3.800 per kilogram.

Amran added, the information was received since yesterday (Monday, 5/2) morning. Hours later, the line of the Ministry of Agriculture (Kementan) held a meeting and formed a Team Serap Gabah (Sergap). "So that farmers do not lose," he explained.

"All parties we invite to synergize to absorb the rice farmers. We should not let the farmers lose, because they are the spearhead of production," said Amran who was accompanied by Vice Governor of West Java Deddy Mizwar, Chairman of the Commission for Business Competition Supervision (KPPU) Syarkawi Rauf, Kasdam III / Siliwangi Brig. Gen. Yosua Pandit Sembiring, Garut Regent Rudy Gunawan, as well as a number of officials in West Java Provincial Government and Garut Regency.

Sergap team is targeted to absorb 2.2 million tons of rice farmers or equivalent to 4.4 million tons of grain. Tempo until June 2018. "It has become a decision," he said. In fact, he has issued a Regulation of the Minister of Agriculture (Permentan) related. Amran explained, there are four schemes of the purchase price of grain consisting of quality, government purchasing price (HPP), flexibility, and commercially.

"The price is beyond quality, that is, the high water content, Bulog cannot absorb, we will install 30 percent immediately," he said, adding that if the water content is high, we will buy immediately.

If the flexibility, the value is 10 percent above the HPP while commercially, the price depends on the discussion of Bulog with Sergap Team and farmers. "So there is no gap farmers harmed," he explained.

On the same occasion, Kasdam III / Siliwangi, Brig. Gen. Yosua Pandit said it would continue to assist farmers to continue production. "Assistance with the TNI continues to be maximized and utilized," he said.

He also conveyed to all agencies, both Kementan, West Java Provincial Government, and Garut Regency that has given trust and support to Kodam III / Siliwangi. Appreciation also expressed to PPL and Bulog for the synergy that was built.

He then compared with Japan. In the "Land of the Rising Sun", a surplus of only 1 million tons of rice derived from total production minus the amount of national consumption. "And there is no price problem in the consumer, because the logistics management," he said.

In the future, his side will help fix the logistics and food supply chain management, so there will be no price fluctuation. "Do not disturb the rice produced by our farmers," he concluded.