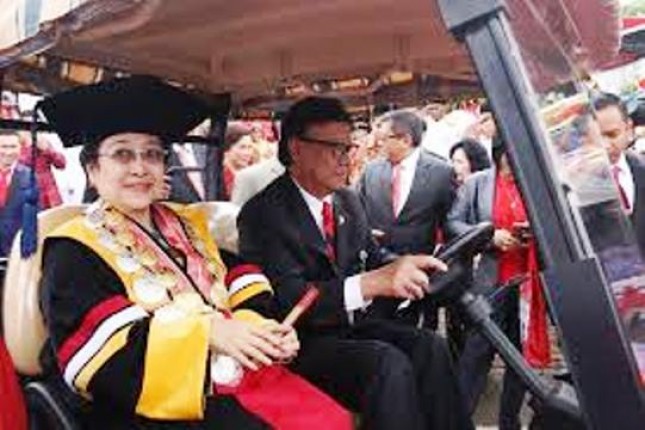 INDUSTRY.co.id - Jatinangor - The fifth President and PDI Perjuangan Chairman of Megawati Soekarnoputri said the issue of women's emancipation is not just about equality.

"The writings of Bung Karno are the basis of my politics," said Megawati began his scientific oration in the award ceremony of Doctor Honoris Causa awarded by the Institute of Domestic Government to him in Jatinangor, West Java, Thursday (8/3/2018).

Megawati stressed that based on Bung Karno's writings, politics should not be discriminatory, and should involve the participation of all the people. Participation of space and people's access to development decisions for politics, economy, and culture can only happen if the government can open it.

In the context of equality of women's political rights, as party chairman, Megawati admitted that she always had difficulty fulfilling the requirement of 30 percent of women in party stewardship. Difficulties, according to her, are also experienced by all other party leaders.

"The intention and intention to give 30 percent quota is very good, but the level on the ground or reality is very difficult to this day," said Megawati.

Megawati said she once asked a female cadre for her reasons for entering politics. The woman said she wanted to have a good career in politics.

Megawati saw that the woman was really active in politics. But at one point the woman returned to Megawati and apologized for having to resign.

"The reason is very apprehensive because I have to choose between my husband and politics, I feel weak, I cannot give suggestions and suggestions because it has entered the family realm," Megawati said.

In the observation of Megawati there is a continuing phenomenon that after Indonesia's independence, the women actually increasingly ebbs in the political field.

"Unlike the mothers while still struggling with fathers, still looks passion and gait in the political field," she said. (Ant)