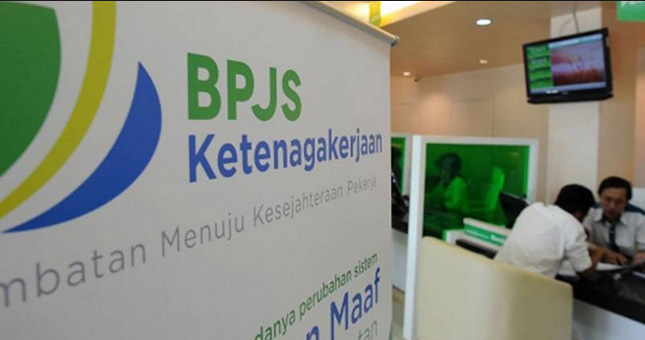 INDUSTRY.co.id - Jakarta - BPJS Employment assessed the series of tragedy bombs Surabaya on Sunday (13/05) that occurred in 3 church locations in Surabaya, towers in Sidoarjo, and Mapolresta Surabaya has killed and injured as well as leaving deep sorrow for the families of victims.

It is also felt by Krishna Syarif, Director of BPJS Employment Service by visiting the victims of the explosion that was undergoing hospital treatment.

Isaiah Bayang (40 / L), a security officer in charge of securing the morning mass at GKI Diponegoro, Surabaya became one of the survivors of this incident, responsibly Isaiah preventing a woman, later identified as a bomber, carrying two people children enter the church yard. Naas for Isaiah, a bag carrying the woman exploded to twice exactly when he was very close to the perpetrator.

Isaiah was immediately rushed by his colleague to the hospital. William Both, and immediately transferred to Dr. Ramelan due to severe conditions that require more intensive treatment again. The action was immediately taken by the medical team by lifting the bomb material on the right thigh and right hand as well as cleaning the wound and sewing in the area of ​​the face and ears.

On the same day, at Pentecost Church there was an explosion coming from a Toyota Avanza that rushed into the churchyard. Siti Mukarimah (25 / P), an RS nurse. William Both who had just finished his night shift was about to return home, on the way back home he must be stuck right behind the car used to detonate the bomb.

Instantly Siti had to fall off from the motorcycle she was using. At the time of the incident, Siti is 5 months pregnant; this nasty bomber almost eliminates the fetus's life expectancy and the mother who is struggling to take care of her.

BPJS Employment action fast action on the handling of participants who became victims of this bombing terror of Surabaya. Moral concern and support for the victim who is in the care delivered directly by Krishna who directly visited the hospital where Isaiah and Siti were treated. The deep sadness was also felt by Krishna to see the condition of the two who had to become victims while on duty.

"This incident belongs to a work accident where both are still in order to carry out the task / finished duty at the time of the unfortunate incident, of course we will be responsible in providing accident insurance on this victim, unsparing we will provide care guarantee until healed and work again ", explained Krishna.

As is known, JKK Return to Work program will also provide compensation while not able to work as long as the victims have not been able to carry out their daily work. This is evident in the society about the importance of having social security in order to prepare for social risk wherever and whenever.

Besides, there is a death victim who is an employee of Brownie Cake Shop Amanda Surabaya. Nuchin (56) became the victim of an explosion at the Pentecostal church. Nuchin became a victim while passing in front of the Pentecostal Church of Surabaya. Nuchin heirs get compensation from BPJS Employment in the form of JKM compensation: 24 Million, JHT: 13,12 Million, Scholarship: 12 Million with total: Rp. 49.12 Million, as well as periodic Retirement Benefit benefits paid every month.

Krishna conveyed "this should be a real example to the whole society of the importance of self-protection from social risks that can occur anywhere and anytime," Krishna concluded.