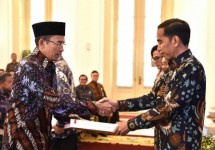 INDUSTRY.co.id - Jakarta - Denny JA Survey Researcher of Indonesia, Aji Al Farabi, said that the Tuan Guru Bajang (TGB) Muhammad Zainul Majdi is difficult to be a vice president candidate to accompany Joko Widodo because he will get resistance from coalition parties.

"TGB is still young, only 46 years old, if TGB becomes vice president at this time, will have a big chance to move forward as president in 2024 General Election," said Aji Al Farabi when contacted in Jakarta on Friday (13/7/2018).

According to Aji Al Farabi, this is one of the factors party-political party coalition partner Joko Widodo supporters will be resistant to TGB Muhammad Zainul Majdi.

"There is a perception that Jokowi's coalition political party wants vice presidents Jokowi is an experienced senior figure who will no longer be a presidential candidate in the 2024 Presidential Election so that all coalition parties will have the same starting position in 2024," he said to media crew.

On the other hand, Aji also questioned the personal communication between the TGB and PDI Perjuangan Chairman Megawati Sukarnoputri.

Aji saw TGB not having good and intensive communication with Megawati. In fact, Megawati is one of the determinants of the choice of vice president for Jokowi.

According to Aji, if the name of TGB mentioned in the stock will vice president who will accompany Joko Widodo because Jokowi requires Muslim representatives to increase his electoral of the majority Muslim voters in Indonesia.

TGB Zainul Majdi, he said, is a local figure in West Nusa Tenggara (NTB) with a Muslim background.

"TGB has experience as Governor of NTB two periods and his name has been frequently discussed in the national political exchange," he said.

If TGB is chosen to be vice president Jokowi, according to him, can meet the criteria as a representation of Muslims and has experience as governor. However, the TGB figure must be acceptable to all political parties supporting Jokowi.

"This is a challenge for TGB," he said.